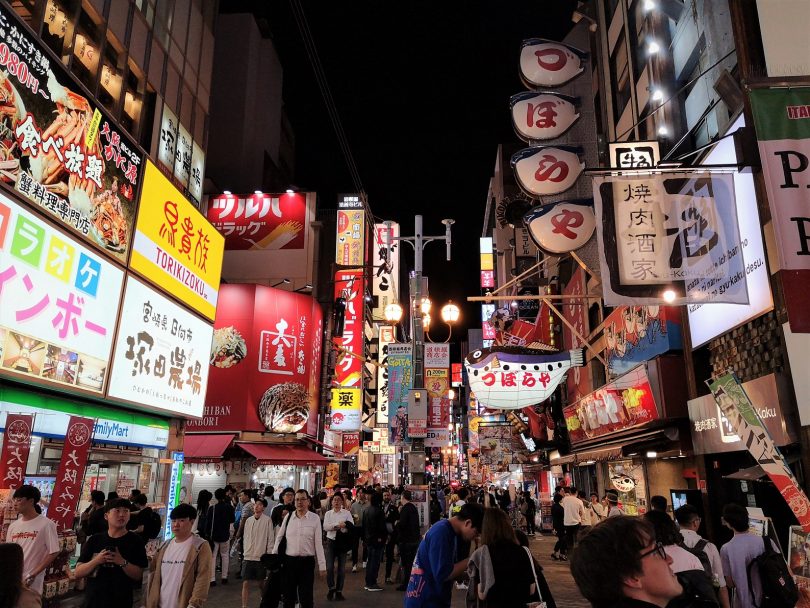 The train chug-chugs its way through the cloudy afternoon into a steadily thickening metropolis. The ride only took an hour, but it’s a startling contrast: from Kyoto’s traditional wooden-temple streets and whooshing bamboo-forest hush we spill into the wild glittering grit and grime of Osaka, where the world is taller, the lights brighter, the food greasier and the edges rougher.

We walk for hours through the mad loud neon-twinkle night, where a million signs flash vertical screams in mysterious Hiragana and Katakana and Kanji; our lack of understanding making it all the more alluring.

In dragon-clad, real-live-Mario-Kart hipster heaven Amerikamura, beside niche designer boutiques and towering graffiti, beanie-baggie kids roll back and forth on bikes and skateboards or sit with their noses in their phones while sipping bubble tea and Sapporo and throwing around American slang like it means something.

For days we wander through the city, getting lost and found then lost again; our only guiding light the bright Dotonbori River, its murky waters painted white and red and yellow in distorted reflections. Here are the okonomiyaki chefs in black bandanas and serious moustaches, layering noodle-egg-shrimp-cabbage pancakes like Karate masters on great big iron griddles the size of dining tables.

As the saying goes, “Osaka no kuidaore” – literally “in Osaka, eat yourself broke.”

Along the riverfront, beneath sprawling, googly-eyed squid statues the city’s famous octopus balls sizzle in giant tubs of bubbling oil, served up by the dozens to hungry locals and brave tourists alike. On our last day we finally order a set but eleven remain uneaten, with only one half-chewed to reveal rubbery sucker-tentacles all curled up in its batter shell.

Away from the busy main streets are a maze of dark, lantern-lit streets topped by a mish-mash of woven wires. We find hidden izakayas and edge closer to gaze in wonder at the teeny-tiny restaurants, their limited spaces packed with sweat and laughter rising from squeezed-in groups of friends and coworkers out to drink the night away over greasy fishy cooking steam, clinking bottles of Asahi, and the sing-song staccato of a language we will never begin to comprehend.

We pass our final few hours in a grotty AirBnB among crumbs and dusty remains of countless previous visitors, wolfing down takeaway gyozas and giant cup noodles. Just after sunrise, we grab our bags and head to the train station. The snow-white-haired BTS boys and short-skirt clubbers who tottered around on drunken legs just a couple of hours earlier have been replaced with menacing crows that now come swooping through the trash-strewn streets looking for loot.

We ride the train with some of Osaka’s early birds on their way to work or, like us, onwards to the airport. They sip cold aluminium-can coffee from the countless vending machines, and we fish out some Yens to buy a final taste of our favourite creamy-caffeine drinks. Our Japanese adventure is over. When our plane shoots off and points its nose towards tropical-thunderstorm Hanoi, we reluctantly wave farewell to this enchanting, bewildering, beautiful place, bowing deeply with a heartfelt arigatou gozaimasu.

And we know that one day we will be back.